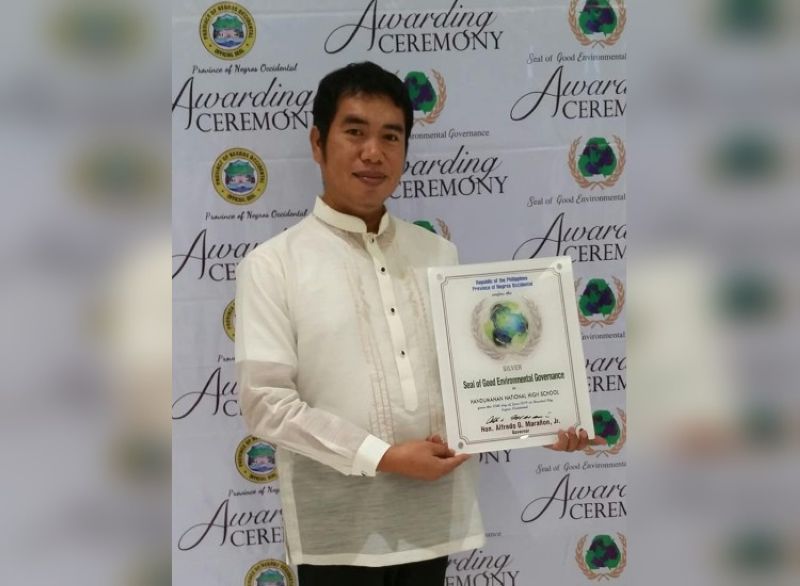 BACOLOD. George De la Cruz has been recognized as Lawyer of the Month by the Global Schools Program and recipient of various Unesco-APCEIU online training courses since 2019 until today. (photo added)

From being a mediaman to being a nurse and later ended up as a top notch educator.

Dr. George De la Cruz of Handumanan National High School has proven that he excels in any endeavor he will embark on.

In fact, it was recently awarded the Global Educationist Leader Award 2021 via a zoom ceremony with 218 winners from 71 countries by the International Internship University accredited and affiliated with the World Education Organization (WEO) and the Organization International Accreditation (IAO).

De la Cruz is among educators from 50 countries who have been selected to become Global Schools Advocates and trained for five months in 2020 to localize and embed global citizenship, sustainability and 21st century skills in school communities.

In addition to this, he has been recognized as Lawyer of the Month by the Global Schools Program and a recipient of various online training courses from the Asia-Pacific Education Center for International Understanding of the United Nations Educational Organization. , science and culture (Unesco- APCEIU) since 2019 to date.

De La Cruz had been invited as one of the guest speakers at the 9th International Conference on Sustainable Development in September 2021 and at international academic forums in Malaysia, India, Togo, Turkey, Mexico and Nigeria.

He is a Certified Mentor for Educators Advocating for Sustainable Development and a recipient of the National Commission for Culture and the Arts (NCCA) Cultural Education Scholarship Program through the Cultural Education Program of the Philippines and Western Mindanao State University.

The Sustainable Development Goals (SDGs), also known as the Global Goals, were adopted by all United Nations Member States in 2015, as a “universal call” to action to end poverty. poverty, protect the planet and ensure peace and prosperity for all by 2030.

As evidence of his dedication to community action, he organized the Barangay Felisa Community Micro Business Enterprise (BFCMBE) which is made up of 332 women whose livelihood is collection from the city’s 10 hectare sanitary landfill. Barangay Felisa is the city’s host community of its landfill.

Therefore, the Basura project was established for the benefit of women waste pickers as beneficiaries of the project with a seed fund of P200,000 that the NCCA had granted. It also resulted in De la Cruz being shortlisted for the Southeast Asia Educational Innovation Awards 2021-2022 in the teacher category.

His journey was not easy as after graduating from university he joined the media circle in 1996, with the Negros Daily Bulletin.

It was then in the mid-1990s that the hiring of nurses overseas ceased due to a global recession. So he took advantage of his journalistic skills, training and exposure to eventually become a full member of the Negros Press Club.

His life as a media personality was colorful like the rainbow and meaningful for being a little journalist.

Later, in 2010, I assumed the position of acting editor of Sunstar-Bacolod at the height of the presidential elections, at the same time working as a clinical instructor.

“Look, where can you find an editor wearing a medical suit while doing office work?” he called back.

“Truly writing is life and as a legman of my time I was indeed active, fruitful and full of life. Then an opportunity arose for legislative work which I seized upon it also where I had the opportunity to pursue higher education which led to a career as a teacher,” De La Cruz said.

Now, as an educator for 19 years, De la Cruz has come to realize that teaching, in its strictest sense, is not about preparing a person or learner for their future, but rather about doing so that the person values ​​himself, thus developing his sense of self. as a global citizen and as a lifelong learner.

For him, learning is best achieved when the teacher empathizes, empowers, engages and exposes the learners to make the whole teaching-learning process more productive and meaningful.

It is a two-pronged mechanism that involves a learning collaboration between a student-parent relationship and a student-teacher relationship.