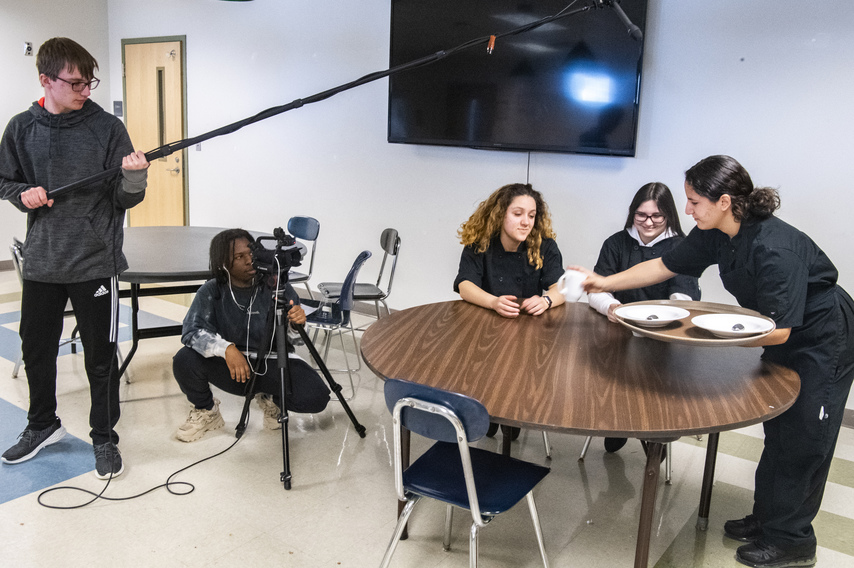 If Yariel Espinet, a high school student from Amsterdam, ever opens his dream Mexican restaurant, he could very well put chicken soup on the menu.

Sure, chicken soup isn’t a traditional Mexican dish, but it’s Espinet’s favorite dish out of all the recipes he’s made so far in his freshman year in the arts program. Culinary Hamilton Fulton Montgomery BOCES.

Additionally, serving chicken soup in a Mexican restaurant would reinforce the multicultural message the students focused on in their most recent project.

The project is just a small part of the HFM BOCES Vocational and Technical Education Center, where high school students and seniors across the region learn job skills and life lessons away from their school districts. Programs include cosmetology, criminal justice, environmental conservation, and skilled trades like plumbing.

“Yes, I want them to be cooks, but that’s not necessarily important,” said Todd Harper, the culinary instructor at HFM BOCES. “We teach the life skills of working on a budget, working in a team, knowing how to work with clients, building a resume and interview techniques. We teach those life skills that we all need.

Harper’s 26-year career in the restaurant industry began at the BOCES Capital Region facility in Albany.

“When I went to college my freshman year, I was way ahead of other students,” Harper said. Prior to starting as a Culinary Instructor at HFM BOCES in November 2020, Harper’s career included cooking for local restaurants, corporate chains, at Marriott hotels, university dining halls and at a life center for the elderly. “Knowing all the cooking techniques, knife skills, food safety – people coming out of high school, they didn’t have that experience.”

HFM BOCES students say they appreciate the practical skills they learn by spending about half of each school day at HFM BOCES facilities in the city of Johnstown. The juniors come in the morning, the seniors in the afternoon. Students in the Digital Multimedia program study everything from graphic arts and photography to advertising and animation. They also work with real businesses and organizations in the community, like Nathan Littauer Hospital and Alpin Haus RV, to produce real ads.

Shawn Majewski, a junior at Fonda-Fultonville, hopes to embark on a career in film editing. At HFM BOCES, he was involved in hands-on projects that gave him the chance to use the same kinds of tools he will use once he enters the industry as a professional.

“I chose this path because it’s something I want to pursue in the near future,” Majewski said. “It gives me a deeper analysis of each of the software I like to use.”

Phil Schuyler, who has taught in the digital media program for 15 years, said a major component is giving high school students access to professional equipment, whether it’s a boom microphone or a sound editing software. Schuyler even works with industry professionals to ensure HFM BOCES’ facilities and curriculum meet current workplace standards.

“We’re trying to prepare kids for college or their career path, so we have to have what they’re going to use when they leave school,” Schuyler said. “So if the industry uses Apple and Adobe, that’s what we have.”

The focus on practice pays off in the real world, Schuyler said. For example, he recently had a student who entered the program knowing he wanted to work for the family lumber business. The student’s objective was to learn how to create a professional website. And that’s exactly what he learned developing a website for the family business. It was so professional that the following year, the alumnus heard from someone in Japan who needed wood due to a wood shortage.

“He started a website, and all of a sudden his family was selling timber from Edinburgh, New York, to Japan. It was all because of his website,” Schuyler said.

Of course, intangible assets are also important. In fact, the more esoteric lessons are often incorporated into the curriculum. For example, a project like Restaurant Commercials teaches the physical video production and sound editing skills needed to produce a commercial alongside lessons on inclusion.

For students like Espinet, the project helps to reinforce their convictions.

“We are all the same,” Espinet said. “It’s just that we have different views on food, and that’s what we like. We love that everyone has different takes.

More from The Daily Gazette: