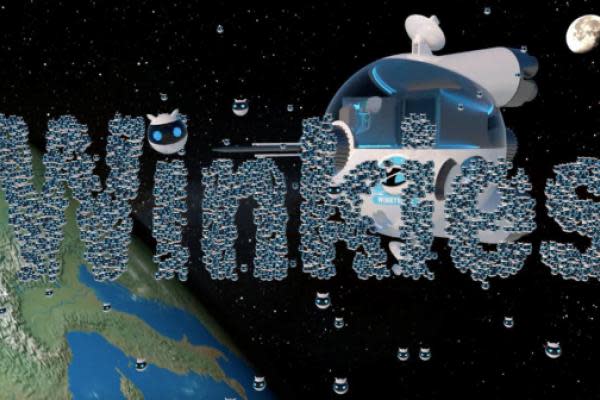 The following message was written and/or published in collaboration between Benzinga’s internal sponsored content team and a financial partner of Benzinga.

The French start-up Mainbot announces the creation of The First Global Education Games Metaverse — The Winkyverse — to teach new technologies to children and their families.

The Winkyverse will be based on blockchain technology and will have its own cryptocurrency: The Winkies. It will be offered to the public via an ICO from October 25.
The project has already attracted big names in the Blockchain ecosystem such as Sébastien Borget, co-founder of The Sandbox; Nicolas Gilot, co-founder of Ultra; Mickael Canu, co-founder of Ternoa; and Kyle Chassé, CEO of Paid Network and Master Ventures.
Mainbot recently unveiled the first collection of 12,111 NFTs: The Winkybots. It can be used as an avatar in The Winkyverse, and some of them can be 3D printed.
Until then, Mainbot was mainly known for its educational robot “Winky”, which has already sold thousands of units across Europe. Mainbot is now shifting into high gear with the development of a state-of-the-art Metaverse combining blockchain, NFT, augmented reality and artificial intelligence.

WINKY: an educational robot to prepare children for the future

Mainbot’s story begins in 2017 with the creation of Winky, an educational robot to teach programming and robotics to children.
In 2019, Winky became the most funded technology project on the French crowdfunding platform Ulule. In total, more than 1,352 contributors had pre-ordered Winky, the first educational robot made in France.

With launches in the UK, Germany and the US for Christmas 2021, Mainbot expects to cross the 25,000 customer mark by the end of the year.

The Winkyverse: the world’s first metaverse of educational games

The Winkyverse is a 3D open world where users can interact, play and learn as well as create and monetize their educational games. The metaverse itself includes two modules: Winkyplay and Winkymaker.

Winkymaker will offer players the possibility to design their accessories for the robot thanks to an intuitive 3D editor accessible to all. They can then use their creations within the Winkyverse, but also print them in 3D and receive them at home.

The Winkymaker interface will allow users to transform their creations into NFTs and sell them on different marketplaces like OpenSea.

Backed by top investors and advisors

The École Polytechnique, the best engineering school in France, was the first to invest in the project and was quickly joined by several renowned players.

Among them, Jérôme Bédier (former General Secretary of the Carrefour group), Bruno Maisonnier (creator of the Nao and Pepper robots, acquired by Softbank), Michael Ingberg (former CEO of Meccano) as well as Mateo Romano and Philippe Tomazo (former administrators of Mattel and Universal Games).

The Winkies: the cryptocurrency of the Winkyverse

The Winkyverse will have its cryptocurrency, The Winkies, an ERC-20 token created on the Ethereum blockchain. Winkies will be the only method of payment accepted within the Winkyverse.

Winkies will not only allow you to pay for access rights to the Winkyverse but also to buy game subscriptions or make in-app purchases in the various games. They will also be used to pay game and content developers and should be used by advertisers wishing to advertise in the Winkyverse. It will also be possible to acquire Winky Robot at -50% compared to the public price (99€ against 199€) by using Winkies as a means of payment. Finally, Winkie holders will have the right to vote on certain decisions affecting the evolution of the Metaverse.

The Winkybots are a collection of 12,111 NFT living on the Ethereum blockchain. The first 12,000 in the collection were generated by computer programming and the remaining 111 will be created one by one in partnership with artists from different countries.

It will be possible to use Winkybots as avatars within different Metaverses and some of them will be 3D printable. They will then benefit from the same functionalities as the Winky robots.

Winkybots holders will also have the right to create licensed products, and they will earn royalties if one or more of their NFTs are used in commercial projects such as video games, comics, cartoons, etc.

Currently, a miniseries including the Winkybots is in the works for television. All NFTs will be freely tradable Opensea.

The first collection of NFT became available on October 11 on the website www.winkybots.io. It is always possible to register on the waiting list for a chance to get your hands on one of the Winkybots.

The cryptocurrency will be offered to the general public via an ICO from October 25 on the site www.getwinkies.com.

The previous post was written and/or published in collaboration between Benzinga’s internal sponsored content team and a financial partner of Benzinga. Although the article is not and should not be construed as editorial content, the Sponsored Content team works to ensure that all information contained herein is true and accurate to the best of their knowledge and belief. research. This content is for informational purposes only and is not intended to be investment advice.

© 2021 Benzinga.com. Benzinga does not provide investment advice. All rights reserved.