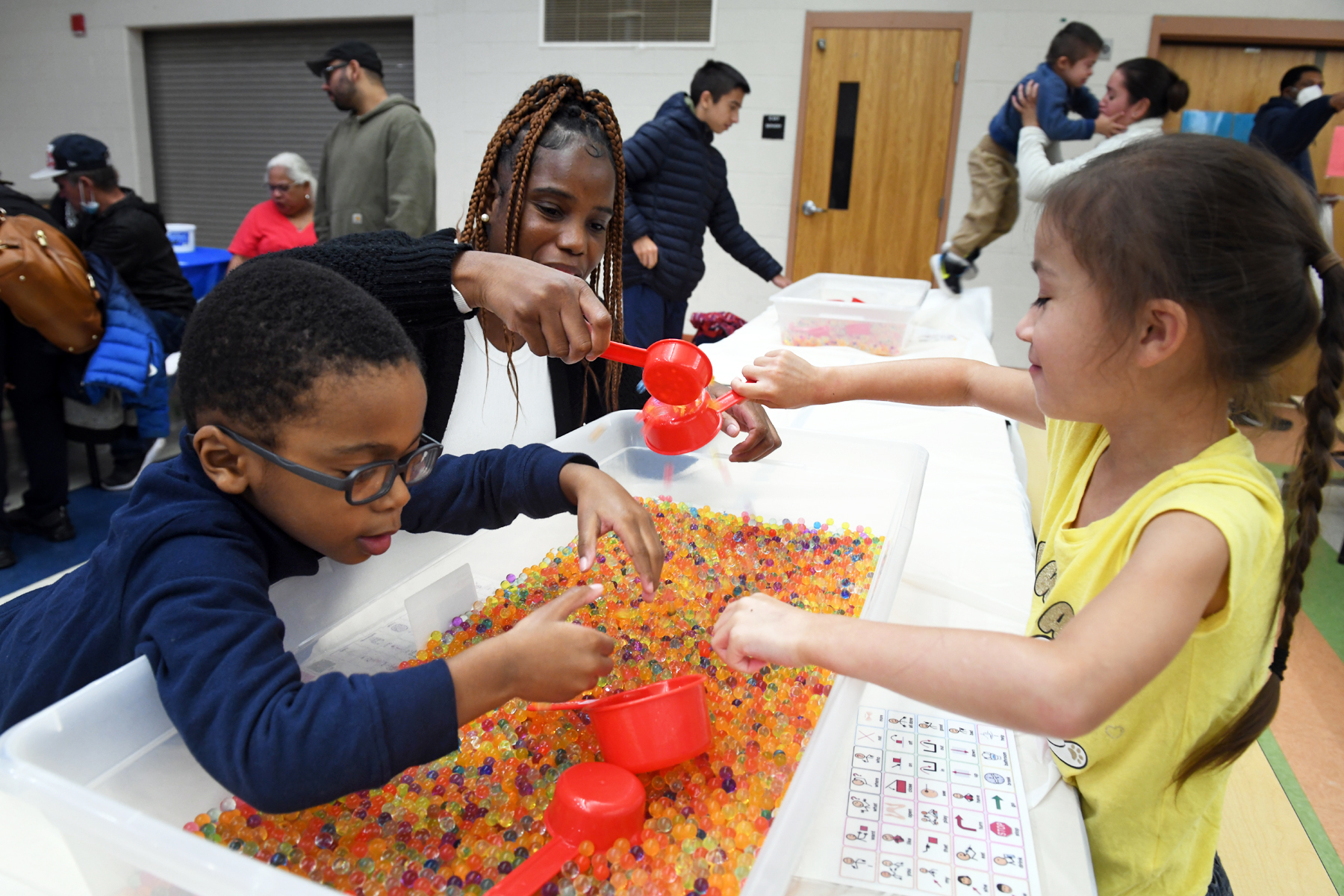 But for some kids growing up with developmental disabilities, everyday tasks like drawing — or even grabbing a paintbrush — can seem like an insurmountable challenge.

That’s why Bridgeport Public Schools is piloting a new arts program this fall specifically designed to help stimulate the fine motor skills of students with disabilities, including those with autism and other conditions.

“The arts are a great way for children to develop occupational therapy skills,” said Sarah-Jane Henry, director of performing and visual arts for the school system. “Painting, coloring and building are really fun for kids. They don’t even realize they are building muscle memory.

The program is being piloted for students at AB Skane School and for some students at Barnum School. In total, approximately 300 students are receiving the new arts-based lessons.

On Thursday, the district hosted the first of two adaptive arts exhibits planned for Barnum showcasing artwork created by students in the program. The second event is scheduled for the spring.

In addition to strengthening fine motor skills, the program also aims to improve the speech and language skills of students with special needs, according to Tracy Taft, a special education teacher who has been tapped to lead the new arts program.

“We try to do very practical things,” Taft said. “The goal we are working on for speech in our classroom is spontaneous speech. We want students to comment on anything and everything during the lesson.

Henry, a former arts teacher, said she designed the adaptive arts program after encountering a physical education program in another district that was created specifically to meet the needs of students with disabilities.

The first year of the arts program is supported by federal and state funds that were directed to the district during the height of the COVID-19 pandemic. Although the district may be eligible for funding for a second year, Henry said she is now seeking outside funding to secure the program’s continuation.

To convince outside groups to provide funding, Henry and Taft collect data measuring the impact of classes on students. Although it’s too early to fully analyze the data, Henry said she’s already seen encouraging results.

“From a socio-emotional perspective, I can already tell that it’s helping the students based on what I’ve seen of their behavior and engagement,” she said. “But it’s not really quantifiable.”

Taft said she’s also seen signs that the program is helping students stay focused on their tasks. She noted that some students who initially struggled to stay engaged in a task for a few minutes are now able to stay on the task much longer.

She attributed early success to the use of open-ended activities that allow students to express their creativity without the pressure of arbitrary rules. One of the first projects involved students dipping old shoes in paint and dabbing them onto paper in a design of their choosing.

“Many of our children are sensory seekers. They crave that messy, sticky, or fluffy sensory input,” she said. “So I like to try to give them activities where it’s just a one or two step direction and they can kind of go wild from there.

Taft said she was surprised at how much the students enjoyed the art lessons. She said she expected some to find tasks like cutting and coloring frustrating, but that largely didn’t happen.