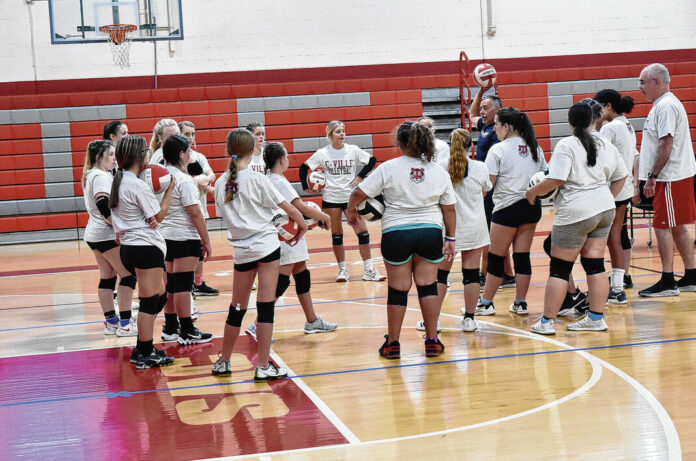 CROTHERSVILLE — Among the things Scott Sage loves about his Crothersville High School volleyball team is that the girls work hard and improve.

Alvarez is well known in high schools and volleyball clubs as he coaches Munciana’s U17 national team which played in the AAU national tournament in Florida. He coached Cowan to a state championship and was an assistant coach at Wes-Del when that school won a state title.

“It’s always nice to have another voice, another coaching perspective and another pair of eyes. Maybe they’re seeing something you’re not seeing or maybe they have a better way of doing the same thing to improve,” Sage said. “We’re working very hard to improve, and we have a lot of areas to improve, and (Alvarez) is doing a great job. It’s also good sometimes to reconfirm some of the things you say to the kids, but they hear it d a different voice.

Sage has worked with Alvarez in the past — twice at Jennings County and once at Hauser.

Sage said this was his 21st year coaching a high school volleyball team. He said it was his first year at Crothersville, he wanted to find someone who had a lot of enthusiasm and energy to help out with camp.

“I couldn’t find a better coach than Pancho Alvarez,” Sage said. “We work on everything from ball control to serving, defense and attack. It breaks it down into very easy to understand basic principles down to extended elements. It will continue as a progression.

At the end of camp, the Tigers were able to set everything up on the pitch.

“We’re going to keep accelerating things, and in our final session on Wednesday it’s going to be more about team dynamics where there are six of us on the court and going through the footwork and the fundamentals on which we have worked throughout the last few days,” Sage said.

Kinsey Martin, a new eighth grader, said this will be her first year playing volleyball after playing softball at Seymour.

Kinsey has a sister, Railie Martin, who will be a freshman at CHS. Sage said four groups of sisters attended the camp.

“My mom wanted us to do another sport, so I chose volleyball,” Kinsey said. “My sister has been playing volleyball for many years. I worked a lot on my serve and I played in the back line. I’m not very good at that. In the past, I played volleyball with my family but not with an organized team. Most of the time, sport is about having fun and doing things. I plan to play basketball.

“I work more on my passes and my serves,” she said. “I came to camp for more experience and to get better at volleyball and hopefully make the varsity team.”

She prefers the back line because it’s more defensive.

“I like the competition and how everyone is upbeat and they are competitive and everyone knows they can get to the ball,” Mendoza said. “I think this year we will be better because we have better teammates and all that.”

“We chose to play in the A (university) league,” Sage said. “We learn, we compete and we improve.”

He said the Tigers will participate in the league tournament in Hauser on July 11, scrimmage in South Ripley on July 18, participate in select open gymnasiums in late July and begin high school training on August 1.

“Keeping them active this summer has been really nice. I was pleasantly surprised at how far we’ve come. We still have a lot of opportunities to improve, and we are,” he said. “We haven’t had much success with wins at Hauser, but we’re playing college-level teams. You can’t fake that stuff in practice. I’m happy with our progress.