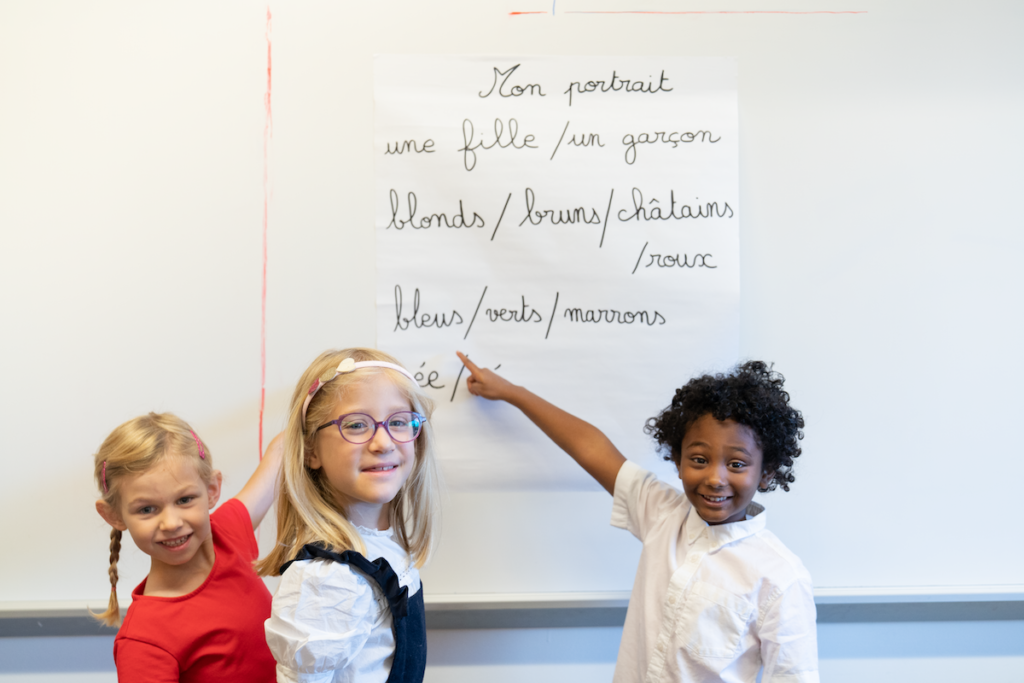 French School of Chicago: more than a global education

During a recent family vacation in France, Pierre-André Balson saw his son Sébastien recognize the fact that French children do not speak English. As a kindergarten student French School of Chicago (LFC) where he experiences a bilingual French-English immersion, Sébastien started talking with his new friends in French — much to his father’s amazement.

“We were in a small town and he even wanted to help us order when we went to the bakery, butcher and vegetable store,” says Balson. “He was so curious and wanted to investigate everything and he fit in perfectly with the other kids. It was very cool.

As one of the very first LFC graduates himself, Balson knew he had made the right choice to send his son to the Independent International School PK-12 in Chicago’s Ravenswood neighborhood.

In fact, LFC has been part of the Balson family since it opened.

“My parents are French and moved here in 1979. I was born in the mid-1980s and we spoke French at home. It was important to my parents that I be bilingual right from the start,” says Balson.

Because they wanted to send their son to a bilingual school, Balson’s parents came together with other like-minded people to form the French World International School in 1995. “At the time, there were 144 children on opening day. Now we are around 800 students,” says Balson, who recently joined the LFC board.

From his earliest memories of a school with passionate and knowledgeable teachers to the sense of global community that has developed over the years, Balson says LFC has always been a part of his life.

“The school has a special place in my heart. I particularly appreciate the consistency and stability of the teachers. From the day the school opened, eight or 10 teachers are still there today, which I think is really unique and impressive. Their passion and involvement matches that of the parents who founded the school,” says Balson.

This longevity is something Balson has not seen at other international schools in the city. The quality of teachers combines with linguistic and cultural immersion to differentiate LFC from families who seek a holistic education for their children, he says.

“What’s really great about this school is that I don’t think there’s another school the size of LFC with this much cultural immersion,” Balson says. From pre-elementary, children experience bilingual learning. In the fourth year, students move on to a third language, adding a fourth or fifth language in high school. In addition to French, German, Mandarin and Spanish, as well as Latin, are offered.

Research shows huge cognitive benefits for multilingual learners. Balson also benefited from the practicality of his education: he was able to find a job immediately after graduating from college during the Great Recession.

“The reason my career was launched was because of my cultural understanding and experience,” he says. “I joined a logistics company that had just bought a business in Europe and needed someone who understood the culture. They recognized the conflict between American and European ideals. I was able to approach it differently .

Balson went on to work for British, French and American companies which all needed his linguistic expertise and cultural sensitivity. He regularly travels to France, China, Portugal, India, England and other destinations – and he says he is always ready to learn about cultural differences for better business decisions, communication and relationship building.

The value of cultural immersion

In truth, students can learn a foreign language in several ways. What they can’t get in a traditional school, Balson says, is cultural immersion. The interaction between language and culture helps students develop an appreciation of difference, which is essential in a globalized world.

“If you look at the world in general, everything becomes more competitive. So if you want your child to have this unique knowledge, you need to provide this education and exposure. It’s really wonderful that I can send my son to a school where all this linguistic and cultural learning takes place in the same amount of time. There aren’t those two or three extra steps to try to fit all that learning into your life and your schedule, which would be next to impossible,” Balson says.

And, if Sebastien were to choose to attend college in the United States, Europe, or Canada, he would have the exposure and flexibility to acclimate to a variety of cultures, Balson says.

“What excites me the most is giving him the maximum tools and exposure, which is so hard for working parents to do,” Balson says. “We don’t have to worry about preparing him in the best possible way for his future. Everything happens in the same place. This convenience factor is important. I’m very grateful.”

Learn more about the French School of Chicago. Visit lyceechicago.org.