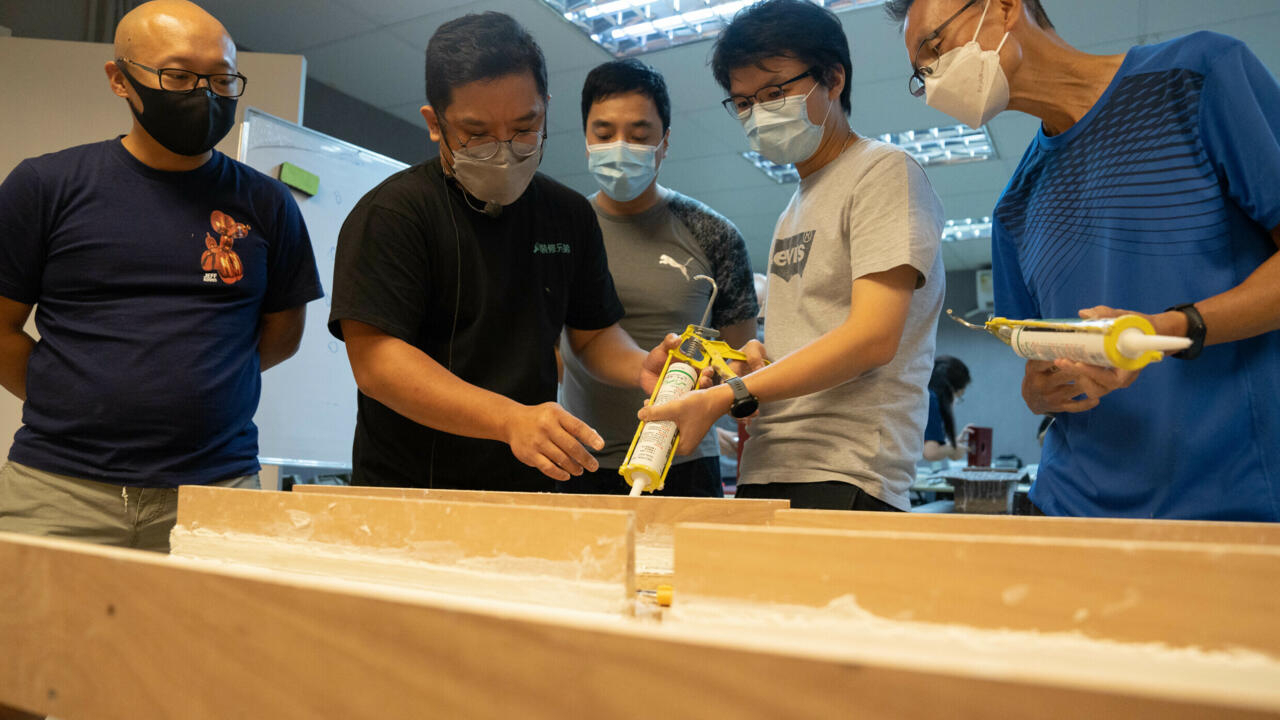 Hong Kong (AFP) – In the bowels of a Hong Kong industrial building, Eric Pun was one of two dozen people crammed into a classroom learning how to drill holes – picking up a new set of skills before heading overseas.

Savvy companies have started offering crash courses in subjects such as home repair and hairdressing, capitalizing on a surge of people leaving Hong Kong as China cracks down on dissent and tough pandemic rules upend the world. ‘economy.

For Pun, a 35-year-old nurse who emigrated to Australia with his family, taking the home repair course was both a practical money-saving measure and a way to mentally prepare for the unknown.

“In Hong Kong, if there is a problem, you can go to the property management office or hire someone from the mall…but when my family lives in a house, I have to rely on myself,” he explains to AFP.

Spending a day at Renobro, one of the few companies offering home repair classes, costs HK$1,980 ($250) and classes are sold out weeks in advance, according to company co-founder and instructor Lau Chun-yu.

“Over a thousand people have taken part in our course,” Lau said.

“When we started, we didn’t expect so many people to emigrate.”

Lau said his students, who are mostly in their 30s and include doctors and teachers, go through a day-long program of more than 40 skills, such as caulking, plastering and rewiring appliances.

‘Most of them are not well prepared, but…they hope to leave as soon as possible,’ he said, citing fears that foreign countries will tighten immigration controls in the long term. .

Hong Kong is currently experiencing an exodus of local and foreign talent.

Many residents have balked at Beijing’s sweeping crackdown on dissent following huge and sometimes violent democracy protests three years ago.

Strict zero-Covid rules also remain in place two and a half years into the pandemic, restricting daily life and isolating the city internationally.

The latest census figures showed a record drop in Hong Kong’s population, which fell 1.6% to 7.29 million from a year earlier. The labor force plunged to 3.75 million, the lowest in nearly a decade.

Many of those leaving are families with school-age children.

Official primary school figures released earlier this month showed there were 70 fewer classes in 60 schools this school year. More than 4,000 teachers left their jobs in the last school year.

The UK has become one of the most popular destinations for Hong Kongers after announcing a visa scheme that offered a pathway to citizenship, arguing that Beijing had abandoned its pre-transfer promise to grant residents freedoms and key autonomy.

Other common relocation choices include Canada, Australia and the United States, reflecting a similar wave of emigration that occurred before Hong Kong’s handover to Britain in 1997.

“I want to be equipped”

Despite their optimism for life abroad, many would-be emigrants told AFP they were worried about job prospects and wanted to learn more skills as insurers.

Fashion retailer Kimi Chau, 35, has completed a series of hairstyling lessons ahead of her move to Britain with her husband and five-year-old child.

“I want to be equipped for a job after I arrive… If I could learn more skills before I leave, then if the opportunity arose for me to open a business, I would be more confident,” he said. she declared. AFP.

Chau said her concerns about Hong Kong’s education system in a changing political climate prompted her to leave.

“Because I have a child, the issue seemed closer to home and it didn’t take me long to make up my mind.”

On a sweltering August afternoon, Chau and other hairdressing students brought friends and family to the salon where they attended their classes for an informal graduation ceremony and a bittersweet farewell. .

Instructor Jason Yip said the hairdressing industry has a relatively low entry threshold and Hong Kongers can find jobs quickly, adding that about a third of his students consider emigrating.

Yip added that many of his students appreciate the social dimension of hairdressing, as a way to stay close to family members and connect with like-minded Hong Kongers.

“For them, (hairdressing) can become a kind of hobby, and they are very happy to have it after coming to a new place,” Yip said.

“That kind of joy is shared and there’s a sense of accomplishment.”