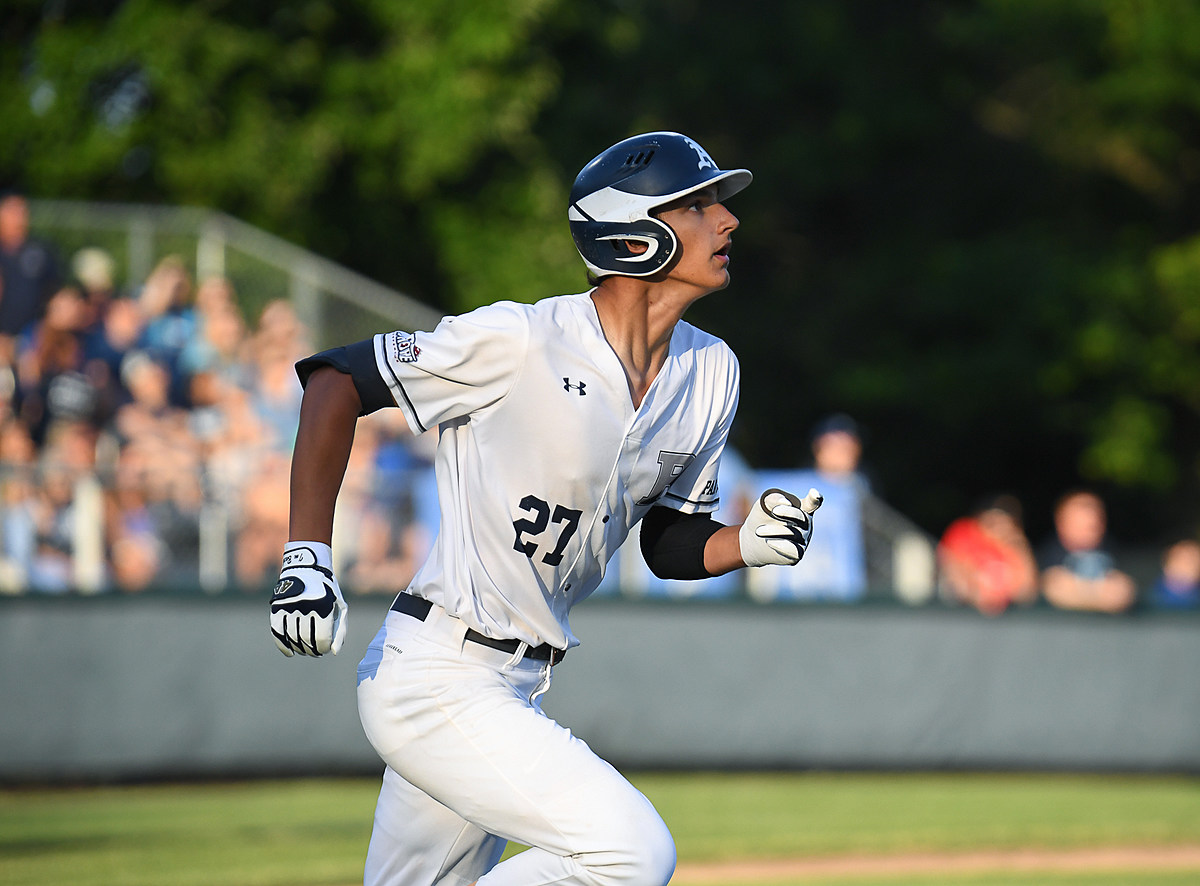 As one of the nation’s top players among the high school class of 2023, AJ Gracia has played high-level competitions at notable venues and come into contact with an array of decorated coaches.

Even Gracia, however, was surprised by the opportunity to play against some of the best players in the country at the home stadium of the defending World Series champions while interacting with a handful of legendary major leaguers.

Gracia — a two-way standout for the Ranney School — was invited to the Hank Aaron Invitational at Truist Park just outside Atlanta and got a start in right field last Sunday night. The event features some of the nation’s best players from “diverse backgrounds” and gives a field of more than 100 players a chance to earn one of 44 game spots at the home of the Atlanta Braves.

“As you can imagine, I was really excited,” Gracia said. “It was a great opportunity to play with some really good players and be around famous baseball personalities and pick their brains. They learned from some of the greats before them and now I have the chance to learn from them and I hope to be able to pass on all that I am able to learn.

During the tryout held at the Jackie Robinson Training Complex in Vero Beach, Florida – formerly and informally known as Dodgertown – Gracia and 43 other players earned a spot in the match of Hank Aaron on July 31. the order of the Hank Aaron team, finishing 0 for 2 with a pair of flyouts – the first of which sailed to the edge of the warning lane along the right field line.

“Just warming up on the pitch was surreal,” Gracia said. “Obviously it’s a Major League ground so you know it’s going to be different, but you don’t realize how much bigger everything is until you’re there. The lights are so much more tall, the outfield is so much bigger, the shadows on the field are different from what you’re used to playing in high school, you hear a lot about how different it is to play in a park in the Major League, especially under the lights, so it was really cool to have that experience.

Gracia played for the team led by former Gold Glove center fielder Marquis Grissom with a coaching staff that included Lou Collier and Dave Gallagher. The other team was led by former Angels manager Mike Scioscia. Players had the chance to interact with Ken Griffey Jr., who was present throughout tryouts and during the game.

“Meeting Griffey and having the chance to listen to him and be with him was probably the most memorable thing,” Gracia said. “Being surrounded by all these great players, coaches and ex-players was amazing, but Griffey is the guy every player wants to grow up. It’s an icon. »

Gallagher, who is a former Major League player and prominent New Jersey coach at the amateur level, named Gracia for the game.

The Hank Aaron Invitational is an MLB initiative to promote baseball in the United States for young players from primarily black and Latino backgrounds. Gracia’s father is a first-generation Cuban-American, with AJ Gracia’s two paternal grandparents having emigrated from Cuba before meeting in the United States.

Gracia just completed a high school season with Ranney in which he earned first-team All-Shore and All-State honors as an outfielder, while leading the Panthers to their first-ever NJSIAA Non-Public Championship. B. He also played in the Area Code Games, which took him to Tropicana Field in St. Petersburg, the first Major League stadium he played at this summer.

After taking time off at the end of the summer, Gracia will head into the fall looking to continue her improvement at home plate while getting back on the mound. According to most public projections of the 2023 MLB Draft, Gracia is considered a future outfielder with a chance of being selected in the first five rounds of the 2023 Draft next July. At the same time, Gracia is committed to playing at Duke University as a two-way player and his current goal is to continue to progress as a hitter, outfielder, baserunner and pitcher.

“Once the Hank Aaron game was over, I went into kind of a self-evaluation, just trying to review everything I went through during the high school season and the summer,” Gracia said. . “I think I had a great high school season at home plate and had a solid summer hitting the ball as well. My main focus is going to be my speed – just trying to be faster and more athletic. I’m not exactly a burner but I like to think I’m pretty fundamentally solid in defense and base management so if I can go a little faster I think that would help.

“At the end of the day, I want to do both (hitting and throwing). When I go to Duke, they expect me to hit and throw, so I feel like I owe it to them to be as good as I can be at both. Even if I get drafted and sign, I want to keep doing both until a team tells me to quit. You never know what’s going to happen with injuries and things like that, so having the ability to do both will only open up more opportunities for me in the future.

More than 100 historically black colleges and universities are designated by the US Department of Education, meeting the definition of a school “established before 1964, whose primary mission was, and is, the education of black Americans”.
StudySoup compiled the nation’s 20 largest historically black colleges and universities, based on 2021 data from the U.S. Department of Education National Center for Education Statistics. Each HBCU on this list is a four-year institution, and schools are ranked by total student enrollment.
2022-08-07
Previous Post: Advice for parents: here’s how to help children develop independent learning skills
Next Post: Guy shares his skills as a weed spotter – Bundaberg Now