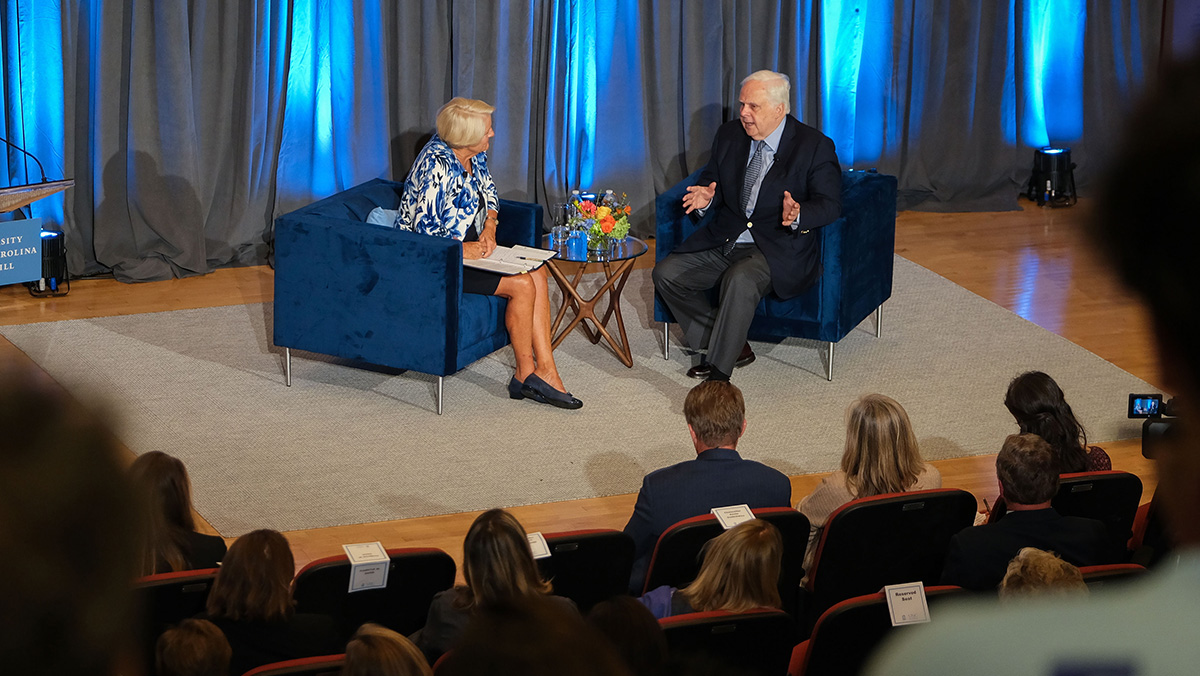 For a thriving global economy and to protect national security interests, the United States must recommit to trade agreements. This was the call to action issued by Frederick W. Smithfounder and executive chairman of FedEx Corporation, in a keynote address delivered on the UNC-Chapel Hill campus on Thursday, September 29.

“The United States should embrace its history as a leader in creating the modern global trading system,” Smith said. “This system has been good for the United States and the world, maintaining peace and stability and creating economic opportunity.”

Recently, he argued that an anti-trade narrative has emerged that goes against US interests.

“With the rise of populist politics, American leadership for open trade is now in jeopardy,” Smith said. “Those who think that the United States can manufacture all the goods we need to maintain and improve our standard of living are indulging in fallacies. We don’t have the people, the manpower and the culture to do it. We have the ability to succeed in trade in services – increasingly digital – and in high-tech, high value-added manufactured goods.

“Fred Smith is a global leader whose vision and commitment to UNC-Chapel Hill led to the establishment of the FedEx Global Education Center here on campus 15 years ago,” said Chancellor Kevin Guskiewicz. “This state-of-the-art center provides Carolina students with a centralized hub for core international programs and services, giving them the opportunity to connect with the world. It is essential to our work in preparing the next generation of leaders to solve global challenges.

Smith called on the United States to maintain its support for a rules-based trading system. By re-engaging in trade deal negotiations, he argued, the United States can join its friends and allies in preserving an open world order and countering the threats China and Russia pose to it.

“I think the case is clear, the United States should trade what it can trade with willing partners and restrict what shouldn’t be traded because of the risks to our national defense,” Smith said.

“What Carolina students learned tonight is that successful global business leaders like Fred Smith are also deeply engaged in international policy issues,” said Barbara Stephenson, vice provost for global affairs. and Global Director. “Tackling complex global issues such as trade, security and sustainability requires leaders from government, business, think tanks, academia and other institutions to come together to share their expertise. and forge a vision to take effective action.”

UNC-Chapel Hill’s Diplomatic initiative-led by Stephenson, a former U.S. ambassador and career foreign service officer – prepares Carolina students to become the next generation of global leaders by helping them develop the skills needed to solve global problems, in part through a direct access to the world of diplomacy. Smith’s speech was part of the initiative Diplomatic talks series – expert lectures and panels that provide Carolina students with insider perspectives on the world of foreign policy, diplomacy, business, and national security.

Smith, who has advocated for investment in carbon capture research, electric vehicles and other sustainable solutions for the transport industry, argued that sustainable business practices are not only good for the planet and society, but also good for business.

In 2021, FedEx set a goal to achieve carbon neutrality in its global operations by 2040. The company plans an initial investment of more than $2 billion to make global operations more sustainable and invest in solutions to address the emissions challenges of the transportation industry.

Throughout his career, the business pioneer has focused on important global issues such as sustainability, innovation and public policy, and is involved in numerous business and political organizations. He is a director of the Center for Strategic and International Studies and was president of the US-China Business Council and co-president of the French-American Business Council.

Smith completed his original analysis of the logistical needs of a highly automated future society while earning a bachelor’s degree in economics from Yale College ’66. He then enlisted in the Marines and served two tours in Vietnam, flying 200 missions as a reconnaissance pilot. He is the recipient of two Purple Hearts, a Bronze Star and a Silver Star.

Smith founded FedEx Corporation in 1971 and continues to serve as its executive chairman. Under Smith’s leadership, FedEx Corporation has grown into a $93.5 billion global business serving more than 220 countries and territories, with 215,000 vehicles and some 700,000 team members worldwide. FedEx has been repeatedly recognized as one of the best companies to work for and is consistently named one of the world’s most admired brands.

“The engine driving all of this is global commerce, and our team members are on the frontlines of the connected global economy,” Smith said. “It’s from this vantage point that FedEx sees the benefits of global commerce every day as we connect people with opportunities around the world.”

In 2007, FedEx Corporation helped fund the construction of the FedEx Global Education Center, which was also funded by the 2000 North Carolina Higher Education Bond Referendum and the support of other alumni and friends of Carolina. The 80,000 square foot building, designed by award-winning architect Andrea Leers of Leers Weinzapfel Associates, has become a vibrant center for the Carolina community to learn and connect with the world.

The FedEx Global Education Center is home to the academic programs and administrative units known as the Global UNC. These include the Office of the Vice Provost for Global Affairs, International Student and Scholars Services, the Office of Study Abroad, six regional study centers funded by the U.S. Department of Education, the Curriculum in Global Studies, from the Global Research Institute and Duke-UNC Rotary. Peace Center.

2022-10-02
Previous Post: Why Companies Should Train Employees Instead of Hiring for Skills
Next Post: Focus on Academic Partnerships, Global Education Summit Begins at University of Chandigarh