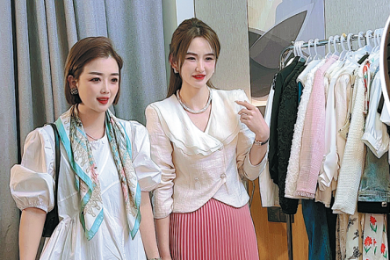 When she was forced to temporarily close her store early last month following the detection of a positive case of COVID-19 at the Sijiqing clothing market in Hangzhou, capital of Zhejiang province (east of the China), Zheng Lingli remained calm.

The 34-year-old Wenzhou native was a bit apprehensive as the peak spring clothing season was approaching and she had recently replenished her stock. But she was also confident because she had faith in the ability of the authorities to handle the situation.

More importantly, she had a card up her sleeve.

“I can live stream,” she said.

Despite the disruption caused by the two-week suspension that followed, Zheng continued to operate, releasing products with his employees through popular e-commerce and social media platforms such as Taobao. His store’s monthly online sales now stand at 1 million yuan ($156,980) even as COVID-19 continues to create difficulties.

Like Zheng, 33-year-old Liu Jun, who is from neighboring Anhui Province, also runs a clothing company in the clothing market. She first dabbled in live streaming and short videos in July.

It currently earns about 2 million yuan in gross revenue from online sales.

Zheng and Liu are just two of hundreds who have benefited from a series of e-marketing and online trading training courses held by the Market Regulation Administration in Shangcheng District, Hangzhou, during of the past year.

Indeed, Liu’s online sales jumped from zero to around 400,000 yuan within a month after taking the courses. “I saw people selling products through live streaming, and I thought it looked easy,” Liu said. “But when you try it, essential skills are needed, like how to tell your audience a relevant story about your clothes and your brand.”

This is precisely what the training aims at.

Using a mix of real-life case studies and learning from e-marketing books, Zhang’s team of speakers cover a wide range of topics, from how to apply proper makeup before livestreaming, how to perform and interpret sales data analysis.

According to Shen Jiandi, deputy chairman of Sijiqing Clothing Group, which runs the Sijiqing Clothing Market, nearly 50 percent of stores in the market are currently selling via livestreaming, either by themselves or by employing live streamers. With over 2,000 stores, it is one of China’s largest and most influential clothing markets.

“Many lacked proper training until the Shangcheng Administration for Market Regulation started to organize e-marketing training courses, which cost next to nothing,” Shen said.

“They are very popular with our vendors.”

In addition to direct marketing, a variety of training programs are available for those wishing to hone their skills and enhance their employability, including courses targeting catering, cooking and warehousing.

Such programs are not limited to Shangcheng or even Hangzhou, but are available throughout Zhejiang.

Statistics from the Zhejiang Provincial Administration for Market Regulation show that the province provided subsidized training to 695,300 people, including 567,900 in small and micro enterprises and 127,400 in sole proprietorships, over the past three last years.

Targeted training programs have been designed based on the needs of local industries. For example, the e-marketing and live trade training is very suitable for the garment industry in Hangzhou and its advanced digital development. Indeed, livestreaming is increasingly being adopted by businesses in the wake of the outbreak.

In Yuhuan County, Taizhou City, where the province’s auto parts and plumbing industries are concentrated, extensive training support has been provided to workers in these fields. Last year, the two sectors’ output reached 47.01 billion and 43.16 billion yuan respectively, up 12.83 and 16.82 percent year on year.

“Zhejiang’s investment in talent training is critical to its economic development,” said Zhang Gangfeng, associate professor at Zhejiang University’s School of Management. “As a place renowned for its private economy, it will greatly contribute to reducing costs and boosting market vitality.”

Figures from the provincial bureau of statistics show there were about 8.69 million business entities in Zhejiang at the end of December, including about 2.83 million small and micro businesses and 5.49 million enterprises. individuals, i.e. 96% of all companies.

“The key to common prosperity lies in expanding the size of the middle-income group and increasing the income of the low-income population,” said Mou Huikang, president of Hangzhou Wanxiang Polytechnic.

Providing training to individual, micro and small businesses is a crucial way to achieve this, Mou said. “It contributes to more balanced development, stable jobs and economic growth, and stimulates the spirit of entrepreneurship and innovation,” he said.

With about 30% of jobs in China produced by small and micro enterprises, and more than 90% of new jobs created by them, these companies play an extremely important role in the country, said Yan Jingfeng, a researcher at Zhejiang Financial College. .

Improving the professional skills of workers in these companies will help them find jobs, which, in turn, will also increase the competitiveness and profitability of companies.

“The resulting increase in the income level of employees can create a broad and solid foundation for common prosperity in Zhejiang and the whole country,” Yan said.

Zhejiang’s push on training is part of a nationwide drive to “get better”. Despite rapid progress in recent years, highly skilled people are still in high demand. Skills mismatch and unbalanced development are common factors.

To address these issues, China last January announced its first national plan to boost vocational training during the 14th Five-Year Plan period (2021-25). Under this plan, subsidies will be provided for vocational training which will benefit more than 75 million people.

For this year, the Zhejiang Provincial Administration for Market Regulation said it plans to train at least another 100,000 employees of small, micro and individual enterprises. This will allow people like Zheng and Liu, the owners of clothing stores, to learn new skills. In the end, it’s never too late to learn.